This month’s Software Developers Cartel was a big success. Once again held at the historic Grand Stafford Theater, we heard from both Kelly Rowe of Insight and cryptocurrency expert Cody Marx Bailey.

We began by introducing our friend Kelly Rowe from Insight. Insight provides expertise in Networking, VoIP, Video, Security, Data Center, Network Storage and are looking to expand their operations. Insight would like to align Student labor with their Services Division so that full time positions can be more easily established for Students and Employer. In addition to their full repertoire of Cisco services, Insight will provide positions that line up with students’ educational profiles to provide a career pathway gaining real job experience in their related field of study.

Cody Marx Bailey, cryptocurrency hedge fund manager and expert, then took the stage and captured the full attention of the audience for over an hour with his fascinating talk on the mechanics and philosophy behind the block chain architecture applied within the digital currency Ethereum.

He began with an explanation on the inherent network resiliency due, in part, to its implementation in multiple coding languages used to distribute risk across the millions of nodes located around the world. He discussed the incentives and disincentives behind the honor system used to create new Ethereum using what Cody dubbed ‘Magic Math’, a system of cryptographic algorithms that have been in use since the 1970s. We also heard a description of the interaction between role the Public and Private ‘Keys’ that secure multiple transaction types utilizing Smart Contracts.

After his introduction, Cody explained the 14.5 second lifecycle of the block chain technology as a race from the time the last ledger was created. A “mining” blitz to factor a large prime number puzzle ensues during which time transactions and contract executions are taking place all over the world. When the puzzle is solved (approx. 14.5 seconds later) the system checks the lucky winner’s answer, who upon authorization, is awarded 5 Ether.  The ledger is updated and the next race to solve a new puzzle begins again bringing the cycle to completion.

The success of the currency relies on the open source nature of the technology which allows full transparency through the distributed network, in contrast to the more traditionally centralized design we see in major banks today. Ethereum is buoyed by the inherently open consensus which validates all transactions created. Extracting that information back out to the physical world, we are seeing a new beginning for intermediate services and private applications to be run for a fraction of the cost by cutting out the middle man.

Cody’s presentation ended with a healthy round of questions to an audience that was excited to learn over a few specialty cocktails.  We would like to thank Cody for his time as well as the Grand Stafford Theater for allowing us access to their historic venue and look forward to our August meet-up where we will once again convene to discuss technology and innovation in a way that allows growth and maintains our community of curious and passionate developers.

Join us once again at the historic Grand Stafford Theater on August 15th for another evening of drinks and tech! 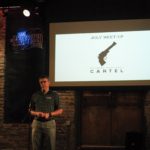 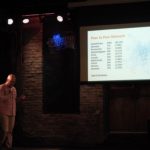